The Vehicle Testing Center (VTC) was founded at Palestine Polytechnic University at the end of 1997 according to the agreement signed by the  PPU and  the Ministry of Transportation (MOT) at the Palestinian National Authority. According to this agreement, the VTC  has become the accredited vehicle testing center, approved as a consultant authority to the MOT. It is the only center authorized to carry out all technical and engineering tests for the vehicles and making changes in  the vehicle’s basic structure and mandatory tests for all imported vehicles. Such tests  were all done in the Israeli laboratories and testing centers before the establishment of this Center.

The Center employs a number of engineers and technicians specialized in automobiles. Most of the Center employees have been send to short-term training courses to be able to work on the latest equipment imported and installed in the Center. Examples of these tests are testing the basic framework, the thickness of the paint layer,  engine-testing devices and  all its electronic systems. Furthermore, the center is continuously provided w ith the latest equipment and devices as well as enhancing its employees technical abilities and skills.

The tests are conducted in the center to ensure the compliance of the vehicles and the amendments with the global specifications, especially the European, local and regional specifications approved off by the Ministry of Transportation

The VTC also provides various services to the citizens in all the West Bank districts and  the various licensing departments transfer the vehicles to be inspected by the Center. Also, the center tests any  vehicle at the request of its owners for the purpose of selling, buying or otherwise. Testing is not intended only to renew the annual licence (Dynamometer), but it also tests the basic structure of the vehicles whose owners installed special devices for different purposes or vehicles that have been involved in serious car accidents, in addition to vehicles requested by the Licence Authority. For example, the private vehicles are required to be tested at the Center  in any of the following cases:

The fees charged for testing a vehicle is about third of what the vehicle owners paid to the Israeli testing centers.

The VTC has a great credibility among the public and the official departments, so the number of private vehicles tested at the request of their owners has increased. This ensures reliability, giving the buyer and the seller a complete picture of the vehicle situation which, in turn, facilitates the buying and selling process. 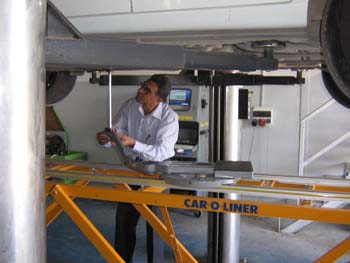