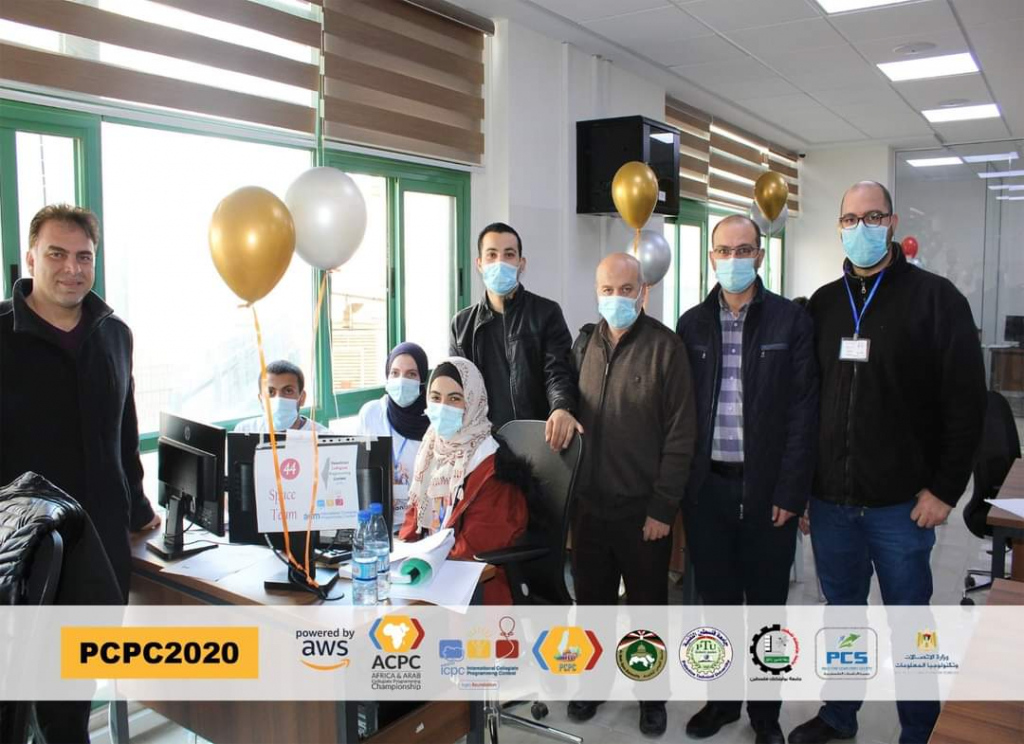 On December 8, 2020 the PPU received a number of advanced positions at the Palestinian Collegiate  Programming Contest (PCPC), hosting the College of Information Technology and Computer Engineering in this competition at the Programming Engineering Unit at the University. It was attended by the contestants from local universities: Bethlehem University, Ahliya University, Hebron University, in addition to PPU’s students. The competition was conducted in several areas in the West Bank due to Corona pandemic and for the purpose of adhering to the protocols of the Palestinian Ministry of Health. One hundred and fifty contestants from the Palestinian universities participated in this competition under the auspices of Dr. Ishaq Sider, the Minister of Communications and Information Technology
Dr. Musa Irfaeyieh, the coordinator of this competition in Palestine, pointed out that the contest aimed at developing the capabilities of the Palestinian university students in programming and enhancing their competitive spirit at the global level by providing an appropriate atmosphere to show the creativity of the Palestinian youth in the international forums.  It also aims to familiarize the educational sector with the students’ abilities, skills, and programming interests to benefit from when applying this on the ground, in addition to helping them to develop their abilities and learn how to manage the programming teams, their thinking and planning to solve problems within a team as well as opening global horizons for them.
Dr. Irfaeyeh also emphasized that Palestine Polytechnic University supports entrepreneurship and creativity by urging students to participate in these regional and global contests that contribute to refining the university students’ skills and developing their abilities and competencies by creating a spirit of competition among them in specialized areas.
In a related context, the Palestinian universities competed for a number of advanced positions. Among the 38 teams that participated in the contest, the PPU’s teams received advanced positions. These teams were: The team “Mohammad Shaloudi, Mohammad Natsheh and Ameer Takrouri” got the second place, the team “Iyas Salah, Yamen Wazwaz and Eid Sonokrot” received the fourth place, the team”Waleed Ju’beh, Basel Atawneh, and Aseel Arafeh” received the sixth place, and the team” Yasin Ju’beh, Qusi Hroub, and abdel Khaleq Juneidi” received the eight place, and all these teams were supervised by the trainer: Khaled Ju’beh.
It is noteworthy that the International Collegiate Programming Contest “ICPC” is the largest and most important global programming competition where more than “4000” universities participate, and that the Palestinian Collegiate Programing Contest (PCPC) is held for the ninth year in a row.  It was launched first from the College of Information Technology and Computer Engineering at Palestine Polytechnic University in 2012,  and contributed to the spreading of the culture of competitive programming and training hundreds of students in all Palestinian universities and school students.